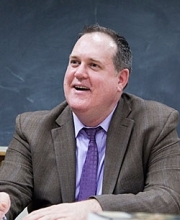 Tickets include a three-course dinner + wine. There will also be a cash bar for beer and cocktails.

The adopted only son and grandson of public school teachers and factory workers, Professor Timothy Patrick McCarthy is an award-winning teacher and advisor whose courses—“American Protest Literature from Tom Paine to Tupac,” “Stories of Slavery and Freedom,” and “Arts of Communication”—are consistently among the most popular and highly rated at Harvard. He is the recipient of Harvard’s Stephen Botein Prize for Excellence in Teaching (2000), John R. Marquand Award for Exceptional Advising and Counseling (2003), Thomas Temple Hoopes Prize for Outstanding Thesis Advising (2002, 2009), Derek Bok Center Award for Distinction in Teaching (2006-2014), and the Dean’s Award for Distinction in Teaching at the Harvard Kennedy School (2009-2014). In 2013, McCarthy was honored with the Stanley Paterson Professorship in American History.

Professor McCarthy graduated with honors in History and Literature from Harvard College, and earned his M.A., M.Phil., and Ph.D. in History from Columbia University. He is a longtime resident of Quincy House in Harvard College, where he currently lives with his husband C.J. Crowder, a noted education reformer, and their dog, Jeter.